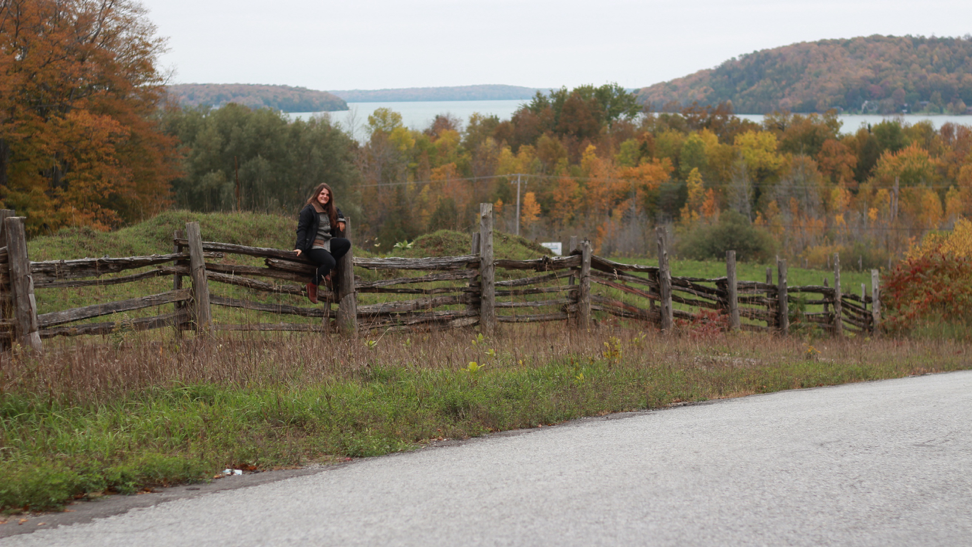 Not to sound ungrateful, but I actually don’t enjoy most of my vacations. It’s not that I dislike pleasant things like eating out or walking around. I just feel a bit empty because I don’t have a relationship with where I’m visiting.

So, last October I decided to volunteer during my week-long vacation from Full Circle. I was put to work cooking meals in an outdoor kitchen and preparing garden beds at Manitoulin Permaculture.

My friend Leah and I drove there on a crisp Sunday through the gorgeous Bruce Peninsula. We took the Chi-Cheemaun Ferry to get to Manitoulin Island, and drove through the Island wanting to stop every 10 minutes for pictures.

As we pulled into the farm, we passed free-roaming chickens frolicking the driveway, and two men constructing a foundation for a small building near the entrance. The man on the tractor introduced himself as Justin, and explained they were constructing a greenhouse. He jumped off the tractor straight into his wheelchair and offered to show us around.

As he gave us a tour of the different gardens, volunteer areas and buildings, Justin talked about his vision for many fantastic future projects. This place, already doing amazing things, is buzzing with potential.

The gardens are next to the main house. I saw the remnants of mighty tomato plants (it’s late in the season), hardy greens and broccoli. Most of their food comes from their gardens and animals (the chickens are used for meat), or from local food producers (they often barter for fish, legumes and grains).

Justin explains that permaculture is a “way of living on this planet that leaves it better for all life, not just humans”. This means increasing soil fertility, which is considered the most fundamental part of making a thriving ecosystem with a high degree of biodiversity.

Indeed, he goes on to say that talking about sustainability is not enough; “People talk about sustainable development, which is a steady state. Permaculture strives to be regenerative, where you’re interacting with the environment in a way where you’re increasing its capacity to support life.”

Permaculture design principles try to work with patterns found in nature, which end up making systems that produce food which don’t require huge energy and labour inputs. For example, having livestock animals and orchards combined. The animals eat the fruit that falls to the ground as food, and in turn their excrement would fertilize the soil for the trees. I found this example in what Justin called the foundational book of this practice: “Permaculture: A Designer’s Manual”. It was filled with tonnes of examples that made you ask: “Why the hell don’t we do this?”

I asked Justin if permaculture can be applied to our current agriculture system. The answer was simple: “Big agriculture and permaculture are almost antithetical to each other. Modern agriculture is basically erasing nature; and you keep it erased using herbicides and GMO’s. Those systems are lifeless except for the one thing you’re trying to grow. Permaculture is on the other end. You’re trying to work with nature. Organic farming is somewhere in the middle.”

The reality of eating locally (let alone from your own land) is not always a glamorous one. Though I have so many reasons for my normally vegan diet, it felt ridiculous staying on a community homestead craving an avocado imported from Mexico. I gave up on day 3 and opted for some eggs we purchased at a gas station on the island.

One of my main reasons for being vegan is that I believe it significantly decreases one’s environmental pollution. However, permaculture uses animals. I took a peek at the Permaculture manual and found this diagram:

The pyramid on the top left demonstrates the foundational principle used to argue that a plant-based diet is less polluting. When you go up a layer in the food chain, you lose a large degree of energy. It takes a lot more energy to keep a grasshopper alive than a blade of grass. To get 10 kg of fish to eat, that actually took 10,000 kg of plant mater to support that fish. However, if us top-of-the-foodchainers ate the plant mater instead of the fish, we would eat much less than 10 000kg of plants.

The book argued this model is too simplistic and contrasts the pyramid to the diagram with the woman. There you see that all food chain levels give back excrement which add to soil fertility. It also mentions that animals are able to eat vegetation humans can’t, but the animal itself can be a source of food for us. A great example is for communities in Northern Canada where growing plants is very difficult. Local animals are able to use the sparse vegetation to power themselves, and the humans are able to eat the animals. Indeed, that has been and is a very important source of food for Indigenous peoples.

Many questions came to my mind. Is the least polluting food system one where it’s a patchwork of locally specific solutions: coldest climates eat animals while others do not? How cold do you have to get? It would be nearly impossible to eat a 100% local Kitchener vegan diet, but is that simply because our economy puts resources towards animal agriculture instead of plant agriculture? Should we even have agriculture? What would Kitchener look like if it ran on permaculture principles?

There’s certainly a lot to unravel. Though I still believe that having a largely plant-based diet is key to addressing climate change, it’s clear that there are many more factors to the environmental impact our food system has. Where food is grown, which practices are used to grow it, and which scale is also imperative.

All in all, I’m grateful for all the people involved in work aiming to create a world that support more vibrant communities, whether in the soil, in ecosystems, and in our societies. I’m excited to continue learning about permaculture, and I hope to return to Manitoulin Permaculture soon again.